For those of you in the Know, (and you Know who you are) this is the definitive answer to that question that everyone who is a fan of John Boorman’s “Excalibur” has always wanted to know…..

The mystery of Merlin’s Charm of Making is, alas, no longer a mystery. 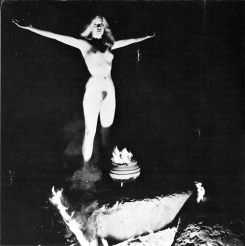 Although Merlin and Morgana both pronounce things differently from each other, and even Merlin has two sounds which to me sound like phonemes but which must be allophonic, I get the following from the Charm of Making in John Boorman’s film Excalibur:

It’s certainly not Welsh. It looks very much like an attempt at Old Irish. (One wonders where Boorman got it.) Following is the best I can do at reconstructing reasonable Old Irish from it. It is probably a defective reconstruction. I have normalized to Modern Irish orthography to indicate lenition.

Modern Irish would have the -is in bháis as a /sh/ sound, but it might not have been so palatalized in the Old Irish period; and the nonpalatal ’s of ‘and’ ought to reinforce that. The third part of the charm could also be dochél dénmha ‘an evil omen of making’, but that suits the sense badly. The word do ‘thy’ is usually unstressed in speech but what can you do… Note that Merlin says dénmhe, which ought to be dénmha; perhaps there is some sort of ‘incantation register’ in which a final vowel can be altered in this way…. In any case, I am less than happy with the third part of this. I’d like to have seen an imperative or hortative, but verb-first syntax precludes even dénae, the imperative of do-gní ­ (from which the verbal noun dénumh is formed), which anyway doesn’t have the nominal formative -mh.

I would be interested in hearing from specialists in Old Irish as to their opinions of this. There are other possibilities for the retro-translation, and indeed the use of a Latin loanword, given the context, is problematic.

(credit to Michael Everson for this masterful investigation)

Here is the Charm of Making, as it appears in the film “Excaliber“:

Old Irish: these are possible spellings for what is being said (as Gaelic is a very strange language when it comes to spelling)

Modern English: Serpent’s breath, charm of death and life, thy omen of making.

In his (incredably inaccurate) book The 21 Lessons of Merlyn, Douglas Monroe says that it is an ancient Welsh Druid spell. This is probably untrue. It is Gaelic, for one (provided the hypothesis is correct); for another, it is from a film, not from any ancient druid text–mainly because the druids didn’t have texts. Their religion forbid any transcription of its dogma.
Nicol Williamson uttering the spell you will find on the last link