While anarchists have historically largely denied the importance of symbols to political movement, anarchists have embraced certain symbols for their cause, including most prominently the circle-A and the black flag. Since the revival of anarchism at the turn of the 21st-century concurrent with the rise of the anti-globalization movement, anarchist cultural symbols are widely present.

The Circle-A is almost certainly the best-known present-day symbol for anarchy. It is a monogram that consists of the capital letter “A” surrounded by the capital letter “O”. The letter “A” is derived from the first letter of “anarchy” or “anarchism” in most European languages and is the same in both Latin and Cyrillic scripts. The “O” stands for order. Together they stand for “Anarchy is Order,” the first part of a Proudhon quote. This character can be written as Unicode codepoint U+24B6: Ⓐ. In addition, the “@” sign or “(A)” can be used to quickly represent the circle-A on a computer. 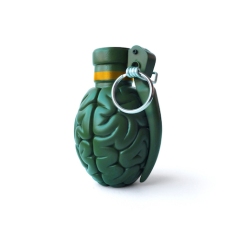 The first recorded use of the A in a circle by anarchists was by the Federal Council of Spain of the International Workers Association. This was set up by the freemason, Giuseppe Fanelli in 1868. It predates its adoption by anarchists as it was used as a symbol by freemasons amongst others. According to George Woodcock, this symbol was not used by classical anarchists. In a series of photos of the Spanish Civil War taken by Gerda Taro a small A in a circle is visible chalked on the helmet of a militiaman. There is no notation of the affiliation of the militiaman, but one can presume he is an Anarchist. The first documented use was by a small French group, Jeunesse Libertaire (“Libertarian Youth”) in 1964. Circolo Sacco e Vanzetti, youth group from Milan, adopted it in and in 1968 it became popular through out Italy. From there it spread rapidly around the world

As noted above, the circle-A long predates the anarcho-punk movement, which was part of the punk rock movement of the late 1970s. However, the punk movement helped spread the circle-A symbol more widely, and helped raise awareness of it among non-anarchists. This process began with the use of anarchist imagery by the Sex Pistols, though Crass were the first punk band to use the circle-A as well as being the first to espouse serious anarchist views. They had earlier discovered it – then merely an extremely esoteric political emblem – while traveling through France. With time the symbol, and “anarchy” as a vague synonym for rebelliousness, were incorporated into common punk imagery.

This led to gradual appearances in mainstream culture over the course of several years, at times far removed from its political origin (described by Situationists as “recuperation”). These appearances typically connected it with anarchy and were intended as sensationalist marketing ploys, playing off of mainstream association of anarchy with chaos. This process mirrored the process of punk subculture coming into the mainstream, which occurred at approximately the same time.